Cesare F. Rosati was born in Italy in 1946, and immigrated to the U.S. (Buffalo, NY) in 1956. A graduate of West Point (Class of 1970), he served in the U.S. Army until 1977. During military service, he obtained a Masters Degree in Electronics from Stanford University. In 1977, he joined the civilian side of government service, retiring in 1996 from the U.S. State Department, where he had served as the Head of a U.S. Delegation engaged in classified international negotiations.

Cesare began writing a series of ‘Near-Future Novels’ in the late 1990’s. Prairie Dogs PPL, the first in a planned series of five was published in 2005 and has been well received (see the synopsis and review below). The second novel, Adriana (SV-1), followed in 2006, along with a collection of poetry written specifically for teenage boys. The third book in Mr. Rosati’s The Brock Saga series, Brockport, FS, was published in 2012.

The first book in the series, Prairie Dogs, PPL, is now available as an e-book from Amazon, Barnes and Noble, and Apple.

The fourth book in the series,  MMC Explorer, was published in 2015.

With the publication of the fifth novel in the series, Inspector Brock, SPF, in 2016, the Brock Saga near future series is now complete.

Mr. Rosati can be contacted directly at:  cfrosati1970@gmail.com
Signed copies of all his books may be ordered by writing to:
Accede Press
1187 Anglers Drive
Steamboat Springs, CO 80487

Cesare’s latest novel, It’s Called ‘A Cull’, was published in 2020.  Readers will find this a very engaging tale in the era of the Covid-19 pandemic. 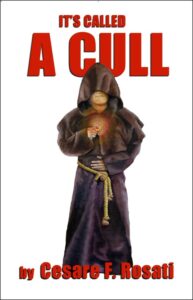 “When Stanford University history student Luke Kanter explores the cave closed since his father’s death a decade earlier, he finds a file containing a letter from his long-dead father that changes his life from that of a carefree student of history into becoming an active agent in what will become history. Within six months, upon reaching the age of 21, the ring that has been passed down through generations will be placed upon his finger. With it comes the decision-making leadership of an ancient, secret society, headquartered in Porto, Portugal. Its mission: to insure the survival of mankind. Its method: to be determined.

Two opposing factions within the society vie for the ring bearer’s nod. The Agris, based in Stockholm, Sweden believe that through agricultural and technological developments, food supplies and distribution can keep up with population growth. The Runcos, headquartered in Sydney, Australia believe that a periodic cull is required in order to keep food supplies and population growth in balance. An international struggle ensues, then intensifies even to the point of murder and threats to young Luke’s life.

Eerily pertinent to this 21st century’s health crisis and a deepening political morass, the possibility of a worldwide pandemic engages a worldwide cast of characters.”

In 2018, Cesare published – The Accidental President. 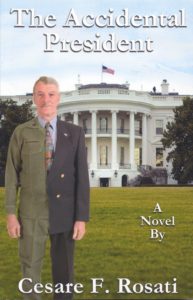 An early review of this book follows:

Once again, author Cesare F. Rosati dives into the politics of Washington, D.C. and the reader cannot resist following newswoman Maggie Pierce into the depths of an enlarging quagmire. As the Republican National Convention approaches, one of Ohio Senator George Cranston’s interns contacts Maggie about his discovery that the senator had rigged the bidding process for the upcoming high-speed rail project in California. Two weeks later the young man’s body is found, another unsolved homicide on the city’s list, and the players in Rosati’s newest novel converge

As the diverse collection of Presidential candidates struggle for the nomination, Maine’s votes remain uncommitted until their senator places himself on the ballot as a write-in candidate. Within a matter of days, delegates and the country-at-large meet and come to know David Kenneth (Deke) McKinney.

Amid the crosscurrents of political infighting, this fast-moving story travels the streets of Washington, D.C. With a rare double vision, the author parallels past and present. Deke’s history advances through his high school years in Auburn, Maine, his service in the U.S. Special Forces, to the inaugural platform in Washington, D.C. In “now” time, Senator George Cranston feeds his rapacious appetite for power. Chapter by chapter, the spotlight brightens on the new president.

Readers will sit back and smile at Cesare Rosati’s surprising conclusion, a confluence of the multiple flows that carry an “accidental” and trustworthy president into the oval office.

Contrary to visions conjured up by the title this novel is neither a western nor a story about a small town in mid-America. Rather, it tells a tale of the scientific and business development of a new space launch technology wrapped in political intrigue.

As a feisty entrepreneur takes on the military-industrial complex (MICs) in court in order to open up the space launch business to purely civilian firms, a surprise player, the BTP Corporation, quietly awaits the Supreme Court’s decision on the case. Under the leadership of its President and CEO, Christopher Brock, BTP has spent decades on a secret project that rocks the establishment within days of the Supreme Court decision.

The ‘present’ in the book is the year 2012. It is a typical election year, with the all-powerful MICs contributing heavily to the re-election campaign of the incumbent president. Following the court’s decision, and the announcement by the BTP Corp., the Administration and its allies scramble to deal with the fallout. In so doing, they reveal the convoluted, and often petty interagency processes that lead to governmental policy. The interactions among elected officials, the entrenched bureaucracy, an incendiary news media and the industrial lobbyists create a lively, vivid, and highly-charged political thriller.

Perhaps most surprising in this novel is the quality of the dialogue. Constructing casual, conversational dialogue is difficult. Not so for this author, who crafts dialogue that is true to his characters and enjoyable to read. Interestingly, it is primarily the dialogue that carries the story. Descriptors are used sparingly; sufficient to set the stage and add context, but never so detailed as to slow the action.

Without alien invaders and far-out science, it is the realistic application of existing technologies that pushes the highly-believable story into the near-future.

Prairie Dogs PPL is available on line at www.accedepress.com

DILLON – Unlike the futuristic science fiction movies and novels of the 1980s and ’90s that showed everyone wearing silver metallic jumpsuits and sitting behind the wheels of flying cars, Cesare F. Rosati’s near-future novel set in 2012 is an intelligent, political thriller that will keep readers on the edge of their seats.

Prairie Dogs PPL is Rosati’s first novel, and he will be signing copies of the book at Borders Books in Dillon at 1 p.m. Saturday.

The book, which takes readers inside private Washington, D.C., offices, covers business, politics, the military and, of course, the media after a court decision is made in favor of private space launches. The idea came from Rosati’s interest in science fiction for the last 20 years, along with his background in the military and government service. He attended West Point and served in the army until 1977, when he joined the civilian side of government with the U.S. State Department as the head of a delegation engaged in classified international negotiations. He retired in 1995 and turned to novel writing three years later.

“I intended to write a science fiction story, but it became a political thriller because of my background,” he said. “People who have read it really enjoyed it because of that.”

The book is written mostly through dialogue and action, with little description, making for an easy read.

“Once you look at this book, you see it’s really written to be a television series or a movie,” said Steamboat Springs resident Rosati. He added that he will probably spend some time promoting the book in the film or television arena.

Prairie Dogs PPL is actually the first in a five-part series of books Rosati has planned. He said he told himself he wouldn’t try to publish the first book until he had written the first three in the series. Once he completed the third, he switched gears from writing to publishing. He plans to release the books a year apart from each other, and he’s already up to chapter four in the fourth book. He said it takes him about 18 months to write a book.

Rosati has been writing for nearly 50 years, with his first foray into print being poetry. He has recently published a book of poetry for teenage boys.

“Very few people would think to do (a poetry book for them),” he said.

The book is entitled: Love & Life (Advice for a Teenage Boy). The poems are written from the perspectives of animate and inanimate objects, including a pair of blue jeans, an ex-girlfriend and a teacher. The book was published by Accede Press and a review can be read at their web site: www.accedepress.com