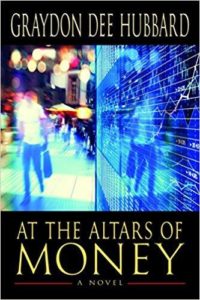 Depending on reviewer and reader reactions, AT THE ALTARS OF MONEY, my third book and second novel, is either my last hurrah or my last whimper. It was a –

.Recipient of the 2018 Evvy Gold Award from the Colorado Independent Publishers Association…for first place in its literary and contemporary fiction competition.

.Long-list nominee for the 2019 Reading the West Award.

Now, at age 88, it’s time to retire…for the third time. I write no more books forever.

You can color me crazy for pursuing a late-in-life literary career. It was a great pursuit. Exciting, fulfilling, frustrating but never discouraging. Graced with a few achievements; also scarred with many disappointments.

SLIM TO NONE, a Journey Through the Wasteland of Anorexia Treatment is recognized as an important work of narrative non fiction, and it’s been used by Johns Hopkins as part of its eating disorder curriculum. Excerpts from the book received awards in national and international literary competitions.

About a half-blood native American fishing guide and his unyielding devotion to a river, CHARLIE’S PRIDE features a modern-day “Last Mohican”. Recipient of an award in a national novel manuscript contest, the book’s reviewer compared it to Norman Maclean’s classic, A River Runs Through It. My book royalties are pledged to Colorado programs of The Nature Conservancy and Trout Unlimited.

Infused with real people and events, and set in real places, AT THE ALTARS OF MONEY blends keen minds with romantic hearts and intrepid souls, then adds a satirical edge. As it captures an American ethos about money and scripts the financial meltdown of 2008, the book also celebrates love, redemption…and mountain climbing. Unlike most books about money, this quirky novel presents points of view from insiders looking out rather than outsiders looking in. Featuring a modern-day Robin Hood, it stages an intriguing dilemma: should society brand him (or her) a criminal or a hero?

In my prior life, I was over 30 years a Denver CPA, where I rose from entry level grunt to managing the largest audit practice in the Rocky Mountain west. As a former officer, Director, or Trustee of 12 Colorado-based organizations including two public companies, I’ve chaired Audit and Compensation Committees and served as Designated Financial Expert. I figure I’ve written, edited, analyzed and explained about a million pages of financial information. I’ve also taught at the University of Colorado; testified before a Grand Jury and in civil and criminal trials; and made financial presentations to the Colorado Legislature General Assembly, to Government agencies, and to a committee of the U.S. Senate.

At age 70, I stood at the podium deep in the heart and soul of Wall Street and helped ring the bell to open the New York Stock Exchange.

At age 65, and with no prior climbing experience, I sought to become the oldest person, measured by age at start, to summit all of Colorado’s 14,000+ft. peaks…the Fourteeners. Ten years later, and after 29 summits, I learned that another elderly climber with the same dream, who began at an age one month older, successfully completed his quest. To deserve success requires a willingness to accept disappointment. Occasional doses of humility help.

Digging deeper into my past and sorting through it:

When a high-school senior in Kirkwood, Missouri, I received my first literary award, and my first short story was published in the St. Louis Post Dispatch.

Although the best academic record in high-school earned me an invitation to enroll in Harvard, the prospect of an Ivy League education was overwhelming. Family finances were meager, and I wanted to go west to college, not east. So I turned down Harvard to attend the University of Colorado. A good choice. Over 50 years later I graduated from Mt. Harvard, Colorado’s third-highest peak, an achievement that produced no degree, only elation and a heightened awareness of the majesty in natural surroundings.

On my saner days I go flyfishing with Cholla, a gorgeous golden retriever. I’m trying to teach her to carry the net.

A POET, by Dee Hubbard

What is a poet?

Some say a poet captures the magic in a moment,

sees inspiration where others only see.

I say a poet dreams the moment’s magic,

divines inspiration where others never see.

MORE ABOUT ME…PLUS EXCERPTS FROM MY BOOKS AND THEIR  ENDORSEMENT QUOTES at https://deehubbard.com