Harriet Freiberger has been a member of the Steamboat Springs Writers Group since 1982. She is a professional writer whose articles have been published both regionally and nationally. Since the first anniversary of September 11, she has written about the veterans of America’s wars for publication in  Steamboat Today and the Denver Post. Raised in the South, she now is nourished by four decades of living on the western slope of Colorado’s Rocky Mountains. The results of her journey can be found in three efforts to capture in print her admiration of the ideal and hope that is the United States of America.

First, intrigued by the second hero in her life, she followed the footprints of New Mexican pioneer Lucien Maxwell who also crossed the Mississippi River and headed west. 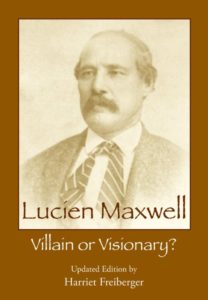 LUCIEN MAXWELL: VILLAIN OR VISIONARY, first published (Santa Fe, NM) in 1999. Then, updated and revised, by Eagle Trail Press, Apache Junction, Arizona in 2016. To read more about the man who, with his wife, owned two million acres of land in northeastern New Mexico, see www.lucienmaxwell.com

Three quarters of a century is a long time to remember an unmarked grave, but Lucien Maxwell’s life was its own memorial. For two decades he built on land granted by Mexico’s governor long before New Mexico became a state. He farmed, ranched, and traded where a thousand miles and a two-month journey separated western outposts from Saint Louis and “civilization.”

Through his efforts a town grew, a town where, for the most part, people were happy and could live without fear, where strangers were welcome and travelers on the Santa Fe Trail partook of his hospitality. In a place and time when lawlessness was the rule, he proved himself capable of maintaining order, nurturing the future of the territory that would become the forty-seventh state. Everyone who traveled the mountain route knew the name of Lucien Maxwell. All were welcomed into his home, for a meal and a night’s rest under a roof.

Hundreds of American Indians, Mexicans, and Anglos thrived under his leadership. Only after most of them died did the need for a marker at his grave site occur to anyone. Even now, one hundred forty-seven years after his death, the stories continue to be told about the man who left more than a physical imprint upon New Mexico, the man who welcomed into his home and at his overflowing dinner table Indian, Mexican, and Anglo; soldier, trader, and preacher; rich, poor, stranger, and friend.

Detractors called Lucien’s Cimarron country an empire. Admirers saw it as a barony. Travelers on the Santa Fe Trail welcomed it as a godsend. Historians admit it was a successful, self-sustaining community. Lucien and Luz Maxwell called it home. 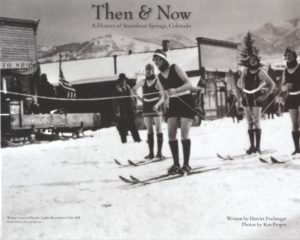 THEN AND NOW – A HISTORY OF STEAMBOAT SPRINGS, COLORADO, with photographer Ken Proper, 1999.  Now in its third printing.

This book presents a series of images that immerse the reader in currents of twentieth century history. Photographs delineate the physical essence of a small western town’s birth and development while connecting people and events in Steamboat Springs with America’s progress toward maturity. People who traveled west expressed the optimism and hope that life could be good in a new place, and they were willing to build that place. Some of what they constructed remains, not only in the buildings that line Lincoln Avenue, but also in what those buildings represented as connections between generations.

The architectural layering of a town’s 134-year development recapitulates that of our country, both reaching toward the next horizon. Seen through a continuum, photos and words offer a guide to the past as well as a key to the future. As each layer of buildings was added, individuals met new challenges in new ways. In Colorado’s northwest corner, two citadels define outer limits of an old main street. At one end, historic hot springs bubble from beneath the earth, heating waters where tourists and residents seek physical healthiness. Thirteen blocks away, at the other end of Lincoln Avenue, a newly erected Bud Werner Memorial Library contains the tools for a balancing mental strength. Ken and Harriet hope this project will fortify the citadels, bringing smiles to the faces of those who walk thirteen blocks from the past into the future. 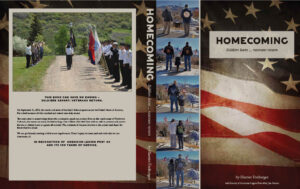 HOMECOMING . . . SOLDIERS LEAVE– VETERANS RETURN   written for the veterans of Steamboat Springs in conjunction with American Legion Post Historian James Stanko and designed by Katie Berning with cover art by Larry Guss. This history appeared in book form in 2022, and will be added to the electronic resources of Routt Memorial Library.

The 21st century sparkled with what appeared as a bright tomorrow in the United States of America, but then terrorists struck in four fully fueled planes. Two jet aircraft demolished the twin towers in New York City; a third was deliberately crashed into the Pentagon in Washington, D.C. Three completed their missions, but 40 men and women aboard United Airlines flight 293 became self-taught citizen soldiers to stop the fourth. For a few hours, then days, timekeepers watched their clocks and billions of humans held their respective breaths. In the tightening grip of terror and the threatening darkness of evil, a wondrous thing happened. Americans experienced a glimpse of each other and of themselves – the largeness of a promising vision. Sadly – the harmony subsided. War ensued, supported by some and opposed by others.

As much as veterans returning from military engagement appreciate the sense of connection with the natural world that the valley harbors, their training has highlighted their ability to make sense of what they have seen and done. Grandchildren of WWII 10th Mountain Division watched events of that September day. They had a choice of what to do with their lives. Many chose the military and learned during their service in Iraq or Afghanistan how different are people from all parts of the country and of the world. Military training has highlighted their ability to see beyond the superficial and understand more than the immediate. Maybe only people who have experienced conflict can find harmony through such understanding. Maybe that ability comes from knowing what is worth fighting for.

In fact, on that September day in the year 2001, the dream that is America clarified in the emptiness of what could not be touched. Those who have experienced war on behalf of that dream will lead the way toward defining that place where it will flourish. Such will be the work of tomorrow.

American soldiers stand at the ready around a world still threatened by the fact that when words fail, war happens. Soldiers still leave and veterans still return.