Great news! We are back at the Arts Depot for our in-person meetings. From June through mid-August, we have an alternate meeting place due to the Depot’s summer children’s programs. The summer location is at the Steamboat Art Museum on the corner of Lincoln Avenue and 8th Street in downtown Steamboat Springs.

For remote folks, we continue to use a Zoom link.  Either in-person or online, all are welcome to join in. 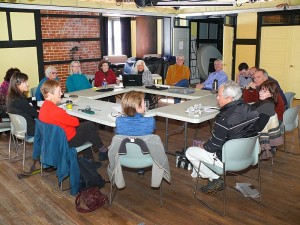 Writers of all genres and levels of experience are welcome to read their unpublished works. We do not critique content. Instead, we offer positive advice on whether the writing is effective. Each participant may read for about ten minutes and then receive a few minutes of comments. Times vary depending on how many readers we have. By meeting weekly instead of monthly like other groups, we are able to keep a degree of momentum on longer works.

WE’RE BACK! THE 2022 STEAMBOAT WRITERS CONFERENCE FEATURES WORKSHOPS FOR WRITERS OF ALL GENRES. GO TO THE 2022 CONFERENCE PAGE FOR ALL THE INFO. YOU MAY DOWNLOAD THE CONFERENCE BROCHURE THERE AS WELL.
HOPE TO SEE YOU THIS SUMMER

A short video of Steamboat’s creatives includes the Writers Group at about 1:06!

Our writers branch out! 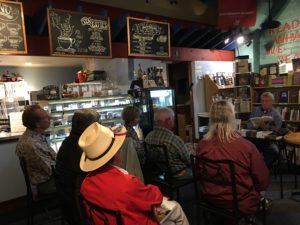 Cesare Rosati booksigning at Off the Beaten Path Bookstore 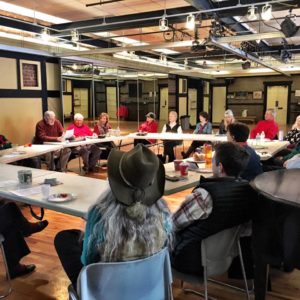 Our annual holiday party in December 2017.

“Who wants to become a writer? And why? Because it’s the answer to everything. … It’s the streaming reason for living. To note, to pin down, to build up, to create, to be astonished at nothing, to cherish the oddities, to let nothing go down the drain, to make something, to make a great flower out of life, even if it’s a cactus.”
—Enid Bagnold

A WRITERS GROUP THAT WORKS

In this polarized political world of the twenty-first century’s second decade, how does it happen that ten to twenty writers of different belief, background and financial status meet every week without rancor and with exponentially enlarging positive results?

It happens. Names and faces and numbers change, but for the last thirty-four years, they have met and listened and talked. It happens high in Colorado’s Rocky Mountains at the old Denver Salt Lake & Pacific Railroad Depot. Though the last passenger train left its travelers at the station back in 1968, today the building opens its doors to vistas far broader than ever before imagined. Every Thursday, from noon until two o’clock, in what once served as the Depot’s baggage room, members of the Steamboat Springs Writers Group use words to reach for the horizons they seek.

Sitting around the table in what has become headquarters of the town’s Council of the Arts and Humanities, they come together -poets and storytellers, professionals and aspiring beginners. From all walks of life and from all over the world they have found their way into a place that, since its pioneer beginnings, has fostered creativity. The writers group has grown from within this community that has gained strength through its history, a dichotomy of stability and change.

Thirty-four years of Thursdays. How does this blending happen over and over again? Without pre-arranged assignment, requirement or enforcement, they unite in a singular purpose. With only minimal supervision, fairness presides. Repeating and reiterating, students absorb critiques: some with initial knowledge of sentence structure and language, others acquiring the necessary expertise.

This is not a class where one has to appear, or prepare for exams. Other work, the kind required to earn paychecks that will buy food and shelter – often takes precedence. Every meeting finds a different man or woman sitting next to another, around the table, paper and pen in hand, some with small computers- each prepared to present work for discussion. No guarantees, no roll calls.

Some demonstrate more prowess than others, some with greater vocabulary, some with more problems or greater advantages. Only one rule governs: no comment on content, only on the effectiveness of the writing.

Writers measure success in a multiple ways, but for these writers the Depot’s key unlocks genuine caring and participation in a definable sense of accomplishment. Thursdays are about more than “criticism.” Beginners receive acknowledgment of their efforts within the limitations of their undeveloped talents. The better and more practiced the reader, the tougher the critique. The better the writer, the keener is his or her perception. Ongoing addition of new participants sustains the group’s vibrant approach to writing of all kinds. Newcomers realize the importance of avoiding the negative; if not, they figure out quickly that they need not return. The overriding inclusive tone quiets both the first-timer’s apprehension and the polished professional’s potential intimidation of others.

There, by the river that waters a green mountain valley, the old Depot welcomes the writers and sends them on their way. The bubbling spring that once made the sound of a steamboat’s whistle can no longer be heard, but Steamboat’s writers have built new tracks, their words the locomotives that carry the past and speed forward into the promise of a brightening future.