Kathleen Guler is the author of the four-part Macsen’s Treasure series of historical spy thrillers set in fifth century Britain.  The final book in the series, A Land Beyond Ravens, won the 2010 Colorado Book Award and the 2010 National Indie Excellence Award, both in the historical fiction category. Other books in the series include: Into the Path of Gods, In the Shadow of Dragons and The Anvil Stone. Kathleen has also published numerous articles, essays, short stories, reviews, and poems. She is a member of the Historical Novel Society and earned her Masters degree in Ancient and Classical History, graduating with honors in November 2014. She is now working on a new novel consisting of three interconnected stories involving Scythian nomads and Celtic raiders set in the Black Sea region in the 4th century BC, Anglo-Saxon pirates off the coast of Britain in the sixth century AD, and intrepid archaeologists in the nineteenth century.

The excerpt below is from “A Land Beyond Ravens,” Winner of the 2010 Colorado Book Award for historical fiction: 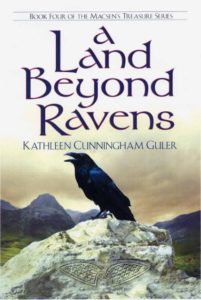 The Fort of Dinas Beris, Kingdom of Gwynedd, Britain

First light crept from the eastern horizon. Not a hint of breeze stirred. As motionless as the air, Claerwen lay curled on her side. Marcus slept, curved behind her, his face in her hair, an arm draped over her.

She spread her hand over the grass, still warm from the previous day’s heat. If green had a fragrance, she thought, it would have to be that of the rich, verdant grass of this place. Beneath her palm, the earth pulsed in its own heartbeat, its rhythm that of day and night, growth, death, rebirth. The birds and other creatures flew, roamed, always free but always somewhere near because it was home.

To lose Dinas Beris? The pain of that thought stung her in the heart. While she had understood the words the night before, now the realization settled in like an iron weight. Dinas Beris. The first place she had ever felt safe. In truth, of all the places she had lived, the only one. Not the place of her birth—that was to the southeast, a place dead to her, lost in her twelfth summer during the brutal, fiery attack she still saw in her mind when she shut her eyes. Places she had fled to since—a farmstead in Strathclyde’s southern fells, an inn in Caernarfon—none had ever felt like home. Places to which she had traveled, with Marcus or in search of him, or during the years of exile, none of them gave her any sense of attachment.

But Dinas Beris, the fort and its lands, lived. Here in the high meadow, beneath her hand that smoothed the grass, was the place she and Marcus had first made love more than twenty years past. Here they had often talked of building a summer house. She had even picked out the spot for the fire pit and had marked the circle for the walls with pebbles. But in the last several years, Marcus had always been traveling back and forth to his multitude of contacts in the months when it was the building-time. The summer house had waited. Now, perhaps, it might never be built at all.

Claerwen smoothed the grass again. If this land had become home and safe haven to her, Dinas Beris was necessary to the whole of Marcus from the day he had been born, passed to him through sixty generations of ancestors. She had no succinct explanation or description of how this was so. It simply was. Cut off his arm and he would bleed but survive. Take Dinas Beris and his soul would be riven to shreds, a soul that would then disappear from the eternal rhythm of life.